John Bogle was inspired to start investment firm Vanguard by a study he carried out while working on his undergraduate thesis. His research discovered mutual funds often did not earn any more money than if they had been invested in the S&P 500 stock market. Even if the value of the funds rose above the benchmark index, management fees reduced the returns to investors below the returns of the benchmark.

"The stock market gives a rate of return that is out of our control," Bogle says. "With an index fund, you will capture the total return, and the cost is very low. Vanguard's largest index fund has an expense ratio of .17 percent, or $1.70 for every $1,000 invested. Index funds from other companies offer similarly low fees. You may get the same return with an actively managed fund, but you could be losing at least 2 percent to trading, mutual fund sales loads, the expense ratio, and other fees."

Vanguard's status at the very pinnacle of the investment industry means it must keep moving with the times. This means looking for innovative new ways to engage up and coming generations to start thinking about how to invest their money.

Vanguard, along with Blackrock, PIMCO, and other ETF firms, were keen to partner with tech startup Acorns, and play the role of investment managers for their exciting new project. 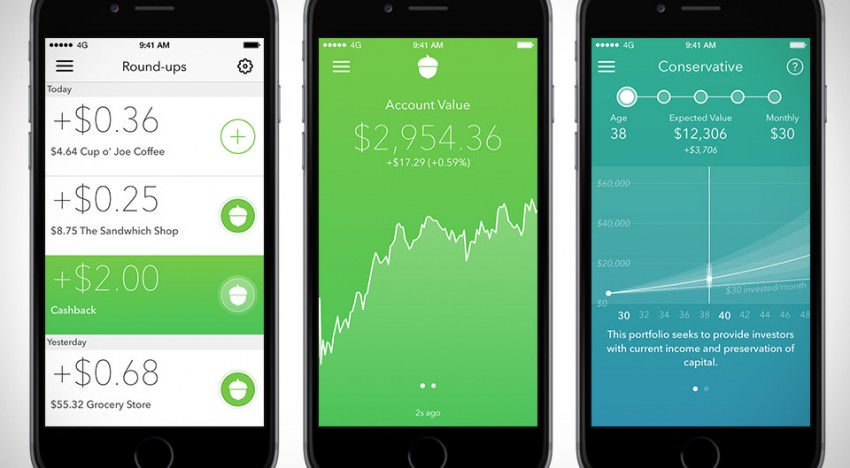 Acorns is a smartphone application which enables users to invest small amounts of money and track its journey as it works for them. After installing the app, users link a credit or debit card. When they make purchases with the card, Acorns will round it up and invest the spare change. Users can also deposit larger amounts manually, and set the risk-taking behavior of the investment bot on a five-point scale from conservative to aggressive, allowing them control over how their money is spent.

Traditionally stocks are bought in whole numbers, so people may be wondering how Acorns can invest a few cents in Apple stock (for example) when individual shares are valued at over $100 apiece. Acorns uses a system called fractional share investing, which allows for investments to be made in dollars and cents, rather than number of shares.

Acorn's sophisticated AI does all this on behalf of the user, so all they need do is set it up, add funds, and then check back regularly to see how their money is performing.

Early investor and now CEO of Acorns Noah Kerner comments: "There's this feeling when you come back to the app, and it's working in the background of life. That feeling, you know - the third day, the seventh day, the fifteenth day - you come back, and you see a balance that has accumulated, it is really encouraging for people. And it starts to get you in the habit of saving and investing, and that encouragement helps people move along on that journey. And it's because it is such a magical moment for people checking the app."

A New Generation of Investors

The whole idea behind Acorns is to educate younger generations about being smart with their money. By allowing the investment of small change rather than large sums of money, Acorns lets people who don't have a lot of disposable income experiment with stocks and shares without 'risking it all.'

Kerner says, "Our customer is the person whose household income is under $100,000 - which is the majority of Americans. We created Acorns from the ground up to serve their best interests. We started with micro-investing, which allows them to invest their spare change. Once they get more engaged they can set recurring investments - $5 a day, $5 a week, for instance - whatever works for them."

Acorns also provides users with a load of data, including charts and tables, so they can clearly follow their money's journey. Millennials, and now GenZs, are more interested in science and statistics than any generation previously, so this data-driven stream of information should appeal to them - as well as their return on investment, of course.

It is clear Vanguard takes the investment power of younger generations seriously. In offering up its portfolio for Acorns' users to delve into, Vanguard is helping remove elitism from the world of stocks and shares, and open it up to the investors of the future.

The last word goes to founder and CEO of Vanguard, John Bogle.

"Since 2007, more than $1 trillion has gone into passive funds and more than $400 billion has gone out of active funds. That's a huge shift in investor preferences. That's unbelievable. The public is leading the way. The stock market is a giant distraction to the business of investing. The market doesn't create value. It subtracts value because of its costs. The less you watch the market, the better off you'll be. [...] Looking at stock prices every day distracts you from what it's all about."